Just scroll down to see the “DAW of the Future”

The debate of MAC vs. PC has long been a problem among digital composers. On the one hand, Apple’s MAC OS provides so many usability enhancements over its Windows counterpart that it is easy to see why so many composers would prefer the clean and uniform interface over the often messy and disgruntled Windows experience (although, with the advent of Windows 8 and metro, this may be changing). The other common complaint about PCs are their aptitude for crashing. On the other hand, since I switched over to a MAC a few months ago, I haven’t experienced a single inspiration-shattering crash or memory fault (knock on wood!).

For any power composer, however, the drawbacks of Apple’s system are in the price-tag. To build an Apple iMac to the same specifications as its PC counterpart costs a modest amount more – one of the most frequently spoken drawbacks of the Apple brand.

So how does one achieve the ultimate modern composing experience – the ease of use of the Macintosh operating system with the power and affordability of a custom-built PC? Well, simply put – the answer is unfortunately: you don’t. But I’ve found a way to come close! The answer is to use both.

For as long as I’ve been composing on a modern computer, I’ve been in search of that ultimate composition experience. I had read about composers who had amazing and elaborate orchestral templates where all of the samples were preloaded into computers separate of their master workstation. It conjures an image not so different from how I imagine Pixar’s render farms look – of course, in reality, it need not be so complicated.

Thanks to software like Vienna Ensemble Pro, it has become possible to very easily drive a cross-platform sample machine (in this case, an affordable PC equipped with 7200RPM hard drives that don’t cost a fortune and lots of DDR3 RAM that you don’t have to breach a warranty to install). What’s even better is that it finally gave me an excuse to create that orchestral template – one where all of the my string sections are elaborately setup (thanks, LASS, for the groupings!). The secondary advantage to this setup is that I can run my CPU intensive reverb (in this case, Altiverb 7) on my MAC host running Cubase 6.5 and not worry about any buffer under-runs or extensive latency which would normally be created by this setup. 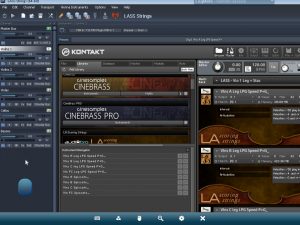 The obvious disadvantage here, of course, is that it’s kind of a pain to control the PC. You can either have it plugged into an entirely separate monitor, keyboard, and mouse, or you can remotely control it via VNC or alternatives like Logmein. I’ll save you some trouble – nothing will kill your workflow like having to jump over to a separate computer – it’s frustrating and can kill your workflow when you want to perform the simple task of loading an extra instrument. And VNC: slow, even on a wired LAN.

The best way I’ve found to control a remote sample machine is to use Logmein.com and an iPad. The touch interface turns out to be incredibly intuitive, and controlling Kontakt (or other software) turns out to be pretty easy on the device. Of course, before I made the realization, I was using Logmein.com in a browser window – this works fine and was actually faster than VNC in my experience. The whole process of switching back and forth between the java applet and Cubase, however, was beginning to give me a headache – and without two monitors I’d have deemed it impossible.

So, in conclusion, I’d like to present my DAW of the Future for the professional composer (of course, many of these things can be substituted, and there are plenty of arguments for why a second computer would never be needed which I tend to agree with – this is obviously for those of whom prefer the user experience provided by OS X): 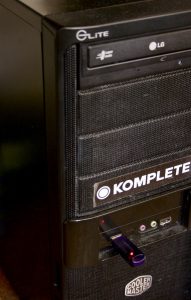 In my case, this setup was mostly facilitated by the fact that I had already built my powerful PC and I was in need of a MAC for development. (plus – have you used Sparrow for email yet?)

Also, because I can only “see” my PC through a remote screen, I’ve reduced my Skyrim playtime by 100%! That means I have more time to WORK!